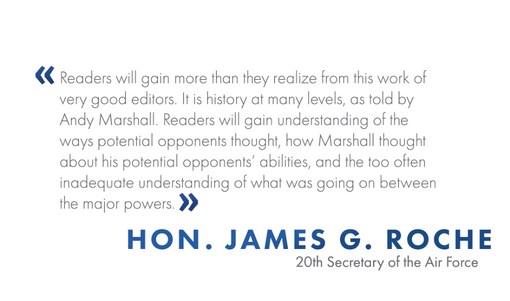 In Thomas G. Mahnken’s Net Assessment and Military Strategy, former members of Marshall’s staff and those who benefited from his mentorship present essays on the history, tenets, applications, and influence of net assessment and Marshall’s work. Featuring an introduction by Andrew Marshall, this volume is essential reading that traces net assessment’s impact on U.S. national security and defense strategy from the Cold War to today.

In The Last Warrior, Andrew Krepinevich and Barry Watts—both former members of Marshall’s staff—trace Marshall’s intellectual development from his upbringing in Detroit during the Great Depression to his decades in Washington as an influential behind-the-scenes advisor on American defense strategy. The result is a unique insider’s perspective on the changes in U.S. strategy from the dawn of the Cold War to the present day.

This publication features reflections, remarks, and essays by:

“This optimistic report on the future of the U.S. and its techno-economic leadership to world prosperity was timed to coincide with the American bicentennial. The report uses statistical studies and logic to argue that intensive development of technology in a post-industrial format and rational planning rather than reduced rates of economic growth and consumption are the best ways to support a growing world population.”

No comments to show.