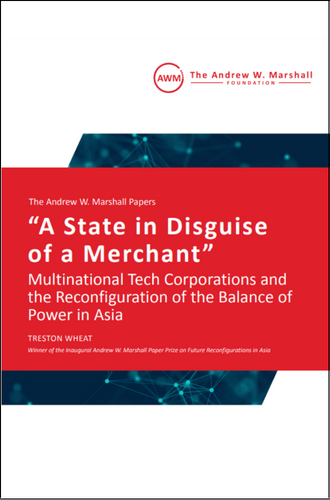 “A State in Disguise of a Merchant: Multinational Tech Corporations and the Reconfiguration of the Balance of Power in Asia

When corporations were created four centuries ago, they fundamentally altered the relationship between the market and the state while also shifting geopolitical power. Technology corporations are creating a similar revolution in the contemporary age. As the world moves from industrial and postindustrial economies to digital ones, technology companies now touch practically every area of modern life. Politically and geopolitically, they are also changing how states interact with each other and achieve their strategic objectives. Technology corporations now play a central role in states’ relative power, and over the next two decades they will impact the balance of power in Asia. A country’s relative power may be intimately connected to native technology companies as they become essential to economic growth, defend infrastructure and businesses, participate in investigations and attributions of cyber events, and even engage in offensive cyber operations. This paper looks at those different areas, examines trends, and then posits a plausible future in which technology corporations may contribute to a reconfiguration of the balance of power in Asia by 2045.

Read the Paper
Back to Library